The library at the Warsaw University of Business is located on the ground floor of the University. The library is open from Monday to Friday from 9.00 a.m. to 5.00 p.m., but it also works during all weekend meetings – on Saturdays from 8.300 a.m. to 2.00 p.m. WWSB’s library provides access to the rich Polish and English-language collections, computer stations with access to digital library collections and a reading room enabling the use of bibliographic resources and journals on the spot. 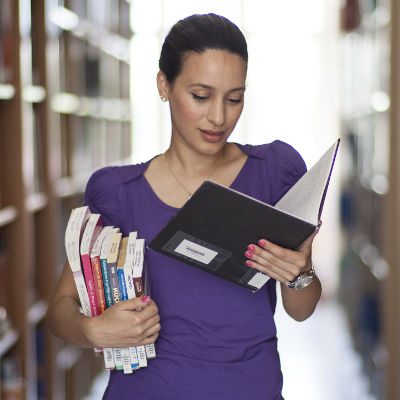 The platform shares electronic publications and educational resources from the portfolio of the PWN Group and several hundred other publishers. The collection of the virtual reading room consists of over tens of thousands of specialist, scientific, popular science and fiction publications, published by the most important Polish publishing houses. The fact that many of the titles are not available in other databases makes IBUK Libra’s offer unique. Due to advanced technology and online access, readers can use the website anytime and anywhere. The platform allows not only to read books, but also to work with text on advanced level.

Academica is a free of charge library that allows you to use the digital collection of the National Library.
It gives access to 3 416 692 publications in all fields of knowledge, including the newest ones, protected by copyright.

Wirtualna Biblioteka Nauki provides access to the complete journal collections of several of the world’s most important scientific publishing houses. The collections contain a total of over 8000 current titles, of which approx. 5000 are available under national licenses of Elsevier, Springer and Wiley with national archiving law. About 30 000 e-books and over 10 000 volumes of book series have also been purchased under domestic licenses, and a further 86 000 Springer e-books are currently available for testing. Science and Nature journals, the Ebsco platform aggregating journals from various publishers and the Web of Science and Scopus abstract-bibliometric databases with additional InCites and SciVal analytical tools are available under national licenses. In addition to national licenses, WBN co-finances consortium licenses for access to international collections of ACS, AIP, APS, CUP, Emerald, IEEE, IOP, LWW, NPG, OUP and T&F journals; the chemical databases of Reaxys and CAS SciFinder; economic databases EMIS, Passport and OECD as well as JSTOR, Knovel and Proquest platforms aggregating journals or scientific books from different publishers.

The databases are available on the EBSCOhost platform; they cover a wide range of fields: science, technology, humanities, social, economic, business as well as medical and biomedical sciences.

Academic Search Ultimate is the most comprehensive, popular, multi-domain, full-text database of scientific publications. The database contains over 9000 complete texts of journals in English and local languages of North America, Africa, Asia, Oceania, Europe and Latin America in an unprecedented global range. The fact that many of the journals are indexed in major citation indexes proves the high quality of the resource. The combination of locally published material with the material from around the world makes Academic Search Ultimate a comprehensive research tool for students looking for a comprehensive source of information in a global perspective. In addition, Academic Search Ultimate contains a collection of approximately 77000 Associated Press videos. The video carousel in the results list allows to access the video related to the searched term. The oldest films come from the 1930s. New materials are added every month. The themes of the films include current and historical events, famous people (politicians, actors, sportsmen), art, music, science and technology recorded on film. Detailed information and lists of journals included in the database are available on the website.
https://www.ebsco.com/products/research-databases/academic-search-ultimate

Business Source Ultimate is the most comprehensive full-text database available in the field of economics and business. The database allows to track global trends and current business topics. With nearly 3500 journals published in English and local languages in North America, Africa, Asia, Oceania, Europe and Latin America, Business Source Ultimate provides access to local business news on an unprecedented scale. Business Source Ultimate also includes case studies, 2 economic reports, country reports, SWOT analyses, company profiles, interviews with experienced entrepreneurs and analysts which introduce students to the tasks they will face in the future. The topics of the database include: accounting, administration, banking, economics, finance, human resources management, management, marketing and sales. Detailed information and a list of journals included in the database are available at:
https://www.ebsco.com/products/research-databases/business-source-ultimate

Regional Business News is an addition to the Business Source database and contains complete texts of over 70 regional American publications in the field of business. The database contains newspapers, radio/TV news transcripts, trade publications and press reports. Detailed information and lists of journals included in the database are available at:
https://www.ebscohost.com/academic/regional-business-news

Health Source: Nursing / Academic Edition – contains over 320 full-text journals, including about 250 peer-reviewed journals scientifically as well as abstracts and citations from about 840 journals in medical sciences, in particular in the field of nursing and health care Detailed information and lists of journals included in the database are available at:
https://www.ebsco.com/products/research-databases/health-source-nursingacademic-edition3

AHFS Consumer Medication Information contains 2200 descriptions of drugs which can be useful not only for students of medicine, pharmacy, nursing, but also for students of other fields related to health care. The base is prepared by the American Society of Health-System Pharmacists. Master File Premier – multi-domain full-text database intended especially for public libraries. It contains about 1600 full-text journals about general, social, business, healthcare, education and multicultural issues. The database contains over 440 full-text monographs and encyclopaedic publications, 55000 source documents, plus a collection of over 1.8 million photos, maps and flags. The database contains a PDF archive from 1975 of such prestigious publications as: American Libraries, Foreign Affairs, History Today, Judaism, Library Journal, National Review, Natural History and Science News. Along with Master File Premier, the Basic Package also includes the MasterFILE Reference eBook Subscription database.
Detailed information and a list of journals included in the database are available at:
https://www.ebscohost.com/public/masterfile-premier

MEDLINE is a database in the field of medicine published by the National Library of Medicine of the United States, it contains indexes and abstracts from over 5,200 scientific journals published in: medicine, nursing, dentistry, veterinary medicine, health care and biomedical sciences. The archives date back to 1809. The database uses a medical thesaurus (MeSH sample pattern files). The database contains bibliographic descriptions from Index Medicus, International Nursing Index, Index to Dental Literature, HISTLINE, SPACELINE, PREMEDLINE®, AIDSLINE®, BIOETHICSLINE® and HealthSTAR®. Detailed information is available on the website:
https://www.ebscohost.com/biomedical-libraries/medline5

ERIC (Education Resources Information Center) is a database published by the US Department of Educational Information Center, containing over 1.6 million bibliographic descriptions and links to 750,000 full-text documents from areas of education and social sciences with archives since 1966, such as: Chronicle of Higher Education, Innovations in Education & Teaching International, School Planning & Management, British Journal of Educational Technology, Education Statistics Quaterly. Detailed information is available on the website:
https://www.ebscohost.com/academic/eric

GreenFILE contains information from extensive research on all aspects of human impact on the environment. It includes a collection of scientific, governmental and popular science publications on global climate change, environmentally friendly building, environmental pollution, sustainable agriculture, renewable energy, recycling and more. The database includes indexes and abstracts of over 980,000 records, as well as the full text of over 14,000 articles from open access sources. Detailed information is available on the website:
https://www.ebscohost.com/academic/greenfile

Library, Information Science& Technology Abstracts (LISTA) contains indexes and abstracts of 610 key journals and indexes selected from over 120 journals. The database also includes bibliographic descriptions and summaries of reports, monographs and conference materials in the field of library science, classification, cataloging, bibliometrics, online information search, information management and many other topics. The archives in the database date back to 1960. Detailed information is available on the website:
https://www.ebsco.com/products/research/databases/library-information-scence-and-technology-abstracts

Teacher Reference Center contains indexes and abstracts from over 230 scientifically reviewed journals. The topics of the database include: the evaluation system, descriptions of best practices, the latest pedagogical research, curriculum development, primary education, higher and continuing education, training materials, language teaching, standards for the assessment of reading and writing skills, school administration, science and technology, and teacher education. Detailed information is available on the website:
https://www.ebscohost.com/us-elementary-schools/teacher-reference-center

European Views of Americas European Views of Americas (1493-1750) is a bibliographic database developed by EBSCO in cooperation with the John Carter Brown Library based on the European Americana collection: A Chronological Guide to Works Printed In Europe Relating to the Americas, 1493-1750. It was established in 1846. The John Carter Brown Library collects unique documents and books. It also conducts advanced historical and humanistic research. The European Views of Americas database (1493-1750) was created for people interested in accessing texts devoted to America written by Europeans in the years 1493-1750. The database contains more than 32,000 records and covers the history of European discoveries in America, descriptions of indigenous people, natural disasters, disease and slavery. Detailed information is available on the website:
https://www.ebsco.com/products/digital-archives/european-views-of-the-america

The library enables readers to access information sources of their interest, catalogs of other libraries, databases located on local and external servers, and Internet information resources.

Digital Library created by Fundacja Nowoczesna Polska; it offers school reading and other books. Readings are enriched by comments and – for users convenience – available in a few formats (including mp3 – for listening).

Using the search engine available on the website, we search the resources of Polish digital libraries created by libraries, universities, archives, museums and research centres.

A digital collection of contemporary scientific books – mainly the ones that are difficult to access, e.g. due to the lack of availability on the market in printed form.

List of free Polish e-books available on Feedbooks.com; new literature is published on the website and posted there by their authors.

Reviewed e-textbooks for science at the academic level which were created by AGH employees for any use.

Video lectures and online courses about mathematical analysis and physics.

Resources containing courses in physics including materials (not only for students), calculus and a mathematical laboratory with GeoGebra. The courses allow to register any user of the Internet.

Over 400 films on a wide range of topics: from economy, through history, to cultural heritage. Resources are available in the form of video and audio recordings of lectures, meetings, debates and interviews from institutions such as Collegium Civitas, University of Warsaw, Fundacja im. Bronisław Geremek, Polish Academy of Sciences.

Polish open scientific publications in the fields of humanities.

Repozytorium Centrum Otwartej Nauki shares various types of scientific materials such as articles (both unpublished and not reviewed – preprints, as well as the materials that were reviewed and published – postprints), books, conference materials, reports or doctoral dissertations.

A catalogue of open resources from graphics and national heritage resources to lesson plans, e-textbooks.

The domain consists of works that are no longer legally protected. It means that the resources might be used for any purpose, i.e. to distribute, to copy, to change and to remix -also for commercial purposes.

One of the largest collections of e-books and other digital materials from European libraries, museums, archives etc. Resources include diaries, journals, letters and books from all over Europe.

The first online collection of free, complete e-books. It includes books that are not copyrighted, as well as materials which authors have agreed to be published.

A project made by Google, focusing on the collection of books and journals in a digital form. The website has a convenient e-book reader that allows you to view books in your browser. Some materials are available for download as a PDF file.

An online catalogue of books and e-books. The website contains information about their location in libraries (mainly American);additionally, it allows to browse, download and read e-books.

A guide to open books by DOAB, collecting scientific and popular science studies from many fields which were published by various publishers.

Our majors Get to know all our majors